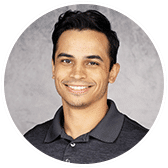 Book an Appointment at Aventura

Dr. Derek Moore was raised in Cranston, Rhode Island where he participated in both baseball and football up until knee injuries forced him away from the field. During his last few years of high school, he began to take interest in physical therapy. He wanted a career that allowed him to provide the chance for others to return from injury as he has. He attended the University of Rhode Island and graduated with a Bachelor’s degree in Kinesiology with a concentration in Exercise Science.

Unsure if physical therapy was the right fit, he began speaking to local chiropractors and decided to pursue a path in Chiropractic. He went on to graduate from New York Chiropractic College and moved to Washington DC where he worked under one of the top chiropractors for the Olympic weightlifting team.

Dr. Moore returned to Florida in 2018 in search of new opportunities. He worked with an elite sports performance training center prepping players for the NFL combine and providing training for professional athletes in their offseason. Dr. Moore worked alongside Physical Therapists and massage therapists to provide these athletes with care critical to their performance. Although the position was temporary it allowed Dr. Moore to grow exponentially in his ability to diagnose and treat musculoskeletal conditions. He has completed courses in Active Release, Titleist Performance, and Functional Range Conditioning which allows him to marry physical preparation with chiropractic in a unique way.

What made you decide to pursue a career in chiropractic?

It allowed the greatest amount of automony with patients.

To learn more about Dr. Moore or book an appointment, call (954) 951-8009.
Contact Us
Subscribe to our Newsletter
Get the latest news about treating back & neck pain straight to your inbox.