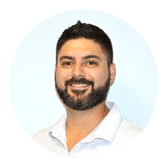 After an injury to his shoulder threatened his ability to play baseball, Dr. Michael Piccirillo was informed from multiple doctors that the only option to heal the damage was surgery. At his routine adjustment with his chiropractor, Dr. Piccirillo informed his chiropractor of the injury. His chiropractor made him this deal, “Give me six weeks, worst case scenario is you don’t get any better and you have the surgery.”

With faith in his doctor, Dr. Piccirillo began therapy. To his surprise, after the first appointment there was a noticeable decrease in pain levels. Within a few weeks, Dr. Piccirillo was able to return to baseball, not only without pain, but throwing harder than he was before the injury. This sparked a passion and inspired Dr. Piccirillo to pursue a career in Chiropractic Medicine.

Dr. Piccirillo, known by many of his patients as Dr. Mike, began his career of helping people as a Personal Trainer & Performance Coach when he was 18 years old. Over the next 10 years he accrued multiple advanced training certifications in fitness and nutrition to help better serve his athletes. He moved on to earn his Doctorate of Chiropractic at the University of Bridgeport, College of Chiropractic.

While attending school, Dr. Mike sought out multiple external courses and certifications to further his knowledge. These courses included Graston Technique Level I, Functional and Kinetic Treatment with Rehab (FAKTR), and Rock Tape Functional Movement Taping Level I and II. He believes that these advanced techniques help him serve his patients optimally.

What made you decide to pursue a career in chiropractic?

Dr. Mike has been a patient of chiropractic since he was a child. Following a shoulder injury in his youth, Dr. Mike witnessed how the body can be promoted to heal itself. The more he learned of the body’s capabilities, the more he wanted to know.

This passion of helping to heal and strengthen the body naturally first led Dr. Mike into coaching, which then led him into Chiropractic Medicine.

“The good thing about science is that it’s true whether or not you believe in it.” – Neil deGrasse Tyson

Shoes to Consider for Back Pain Sufferers

Throughout the holiday season, people find themselves on their feet quite a lot, and many struggle with back pain. What shoes...
Read More

Can a Chiropractor Help With Shoulder Pain?

Chiropractor VisitsJoint PainPain Relief
If you are looking for shoulder pain treatment, chiropractic care can help. Whether you've suffered a shoulder injury, have a...
Read More

Back HealthInjury PreventionOccupational Injuries
Of all of South Florida's employees, construction workers are consistently the most vulnerable. Whether they're perched peril...
Read More
View More Posts
Subscribe to our Newsletter
Get the latest news about treating back & neck pain straight to your inbox.